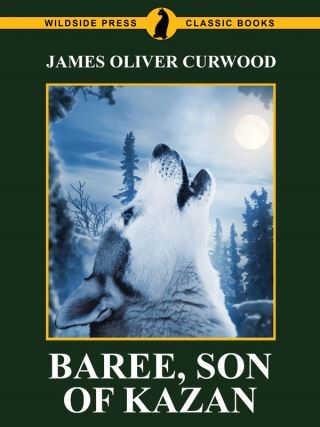 To Baree, for many days after he was born, the world was a vast gloomy cavern.

During these first days of his life his home was in the heart of a great windfall where Gray Wolf, his blind mother, had found a safe nest for his babyhood, and to which Kazan, her mate, came only now and then, his eyes gleaming like strange balls of greenish fire in the darkness. It was Kazan’s eyes that gave to Baree his first impression of something existing away from his mother’s side, and they brought to him also his discovery of vision. He could feel, he could smell, he could hear—but in that black pit under the fallen timber he had never seen until the eyes came. At first they frightened him; then they puzzled him, and his fear changed to an immense curiosity. He would be looking straight at them, when all at once they would disappear. This was when Kazan turned his head. And then they would flash back at him again out of the darkness with such startling suddenness that Baree would involuntarily shrink closer to his mother, who always trembled and shivered in a strange sort of way when Kazan came in.

Baree, of course, would never know their story. He would never know that Gray Wolf, his mother, was a full-blooded wolf, and that Kazan, his father, was a dog. In him nature was already beginning its wonderful work, but it would never go beyond certain limitations. It would tell him, in time, that his beautiful wolf-mother was blind, but he would never know of that terrible battle between Gray Wolf and the lynx in which his mother’s sight had been destroyed. Nature could tell him nothing of Kazan’s merciless vengeance, of the wonderful years of their matehood, of their loyalty, their strange adventures in the great Canadian wilderness—it could make him only a son of Kazan.

But at first, and for many days, it was all mother. Even after his eyes had opened wide and he had found his legs so that he could stumble about a little in the darkness, nothing existed for Baree but his mother. When he was old enough to be playing with sticks and moss out in the sunlight, he still did not know what she looked like. But to him she was big and soft and warm, and she licked his face with her tongue, and talked to him in a gentle, whimpering way that at last made him find his own voice in a faint, squeaky yap.