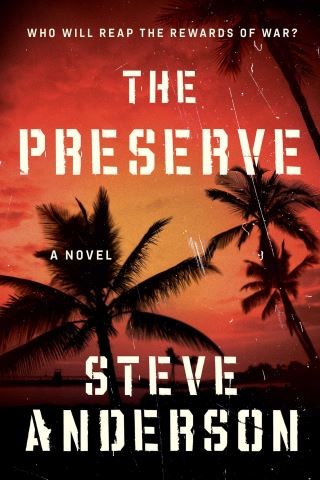 A Heart-Racing Postwar Thriller Ripped from the Pages of History

Who will reap the rewards of war?

Troubled WWII hero turned deserter Wendell Lett desperately seeks a cure to his severe combat trauma, and The Preserve seems to be his salvation. Run by Lansdale, a mysterious intelligence officer, and Lett’s ambitious wartime XO Charlie Selfer, the secretive training camp promises relief from the terrors in his mind. Together with Kanani Alana, a tough-minded Hawaiian also looking for a new start at The Preserve, Lett begins to feel hopeful.

All illusions are shattered, though, when Lett discovers The Preserve’s true intentions—to rebuild him into a cold-blooded assassin. The deadly conspiracy runs deep, all the way to General Douglas MacArthur, and his refusal to cooperate is met with merciless punishment. His only hope is Kanani and her dangerous escape plan that would grant freedom from The Preserve—if he can hide while surviving the harsh wilderness of the Big Island.

Based on true events, The Preserve is a fast-paced historical thriller that will leave you breathless.

The Preserve is the second book featuring Wendell Lett, who first appeared in the prequel Under False Flags.

Steve Anderson: Steve Anderson is the author of the Kaspar Brothers series (The Losing Role, Liberated, Lost Kin), Under False Flags: A Novel, and other works centered on WWII and its aftermath. In The Other Oregon and the novella Rain Down (Kindle Single), he writes about his home state. Anderson was a Fulbright Fellow in Germany, and is a literary translator of German to English as well as a freelance editor. He lives in Portland, Oregon. http://www.stephenfanderson.com