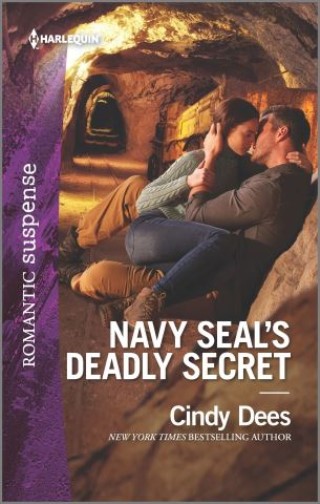 He made it home from a war zone.

But danger remains in the mountains of Montana…

Navy SEAL Brett Morgan has come home to recover after a disastrous deployment, desperate to remember what happened. As he struggles to find his feet as a civilian, he intervenes in an armed robbery, saving the life of waitress Anna Larkin. But there’s more to Anna’s past than meets the eye and as that past circles dangerously closer, Brett will have to draw on all of his combat experience to keep them both alive.

Cindy Dees: Raised on a horse farm in Michigan, Cindy Dees dropped out of high school at 15 to attend the University of Michigan where she earned a B.A. in Russian and East European Studies. She became a U.S. Air Force Pilot, worked at the White House, and was a part-time spy during her military career. Her first novel was published in 2002, and she has published over forty more since then with HRS and HQN. She is a 5-time RITA finalist and 2-time RITA winner and has won numerous other awards.