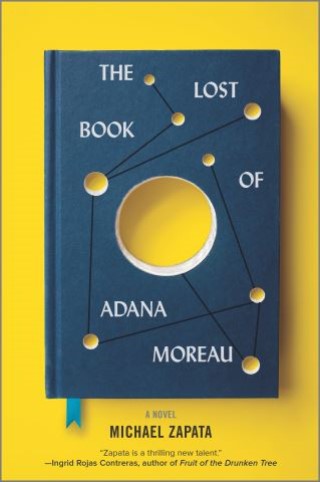 The Lost Book of Adana Moreau

A Best Book of February 2020 at Salon, The Millions, LitHub and Vol 1. Brooklyn

In 1929 in New Orleans, a Dominican immigrant named Adana Moreau writes a science fiction novel. The novel earns rave reviews, and Adana begins a sequel. Then she falls gravely ill. Just before she dies, she destroys the only copy of the manuscript.

Decades later in Chicago, Saul Drower is cleaning out his dead grandfather’s home when he discovers a mysterious manuscript written by none other than Adana Moreau. With the help of his friend Javier, Saul tracks down an address for Adana’s son in New Orleans, but as Hurricane Katrina strikes they must head to the storm-ravaged city for answers.

What results is a brilliantly layered masterpiece—an ode to home, storytelling and the possibility of parallel worlds.

Michael Zapata: Michael Zapata is a founding editor of MAKE Literary Magazine. He is the recipient of an Illinois Arts Council Award for Fiction, the City of Chicago DCASE Individual Artist Program award and a Pushcart nomination. As an educator, he taught literature and writing in high schools servicing dropout students. He is a graduate of the University of Iowa and has lived in New Orleans, Italy and Ecuador. He currently lives in Chicago with his family. MichaelZapata.com