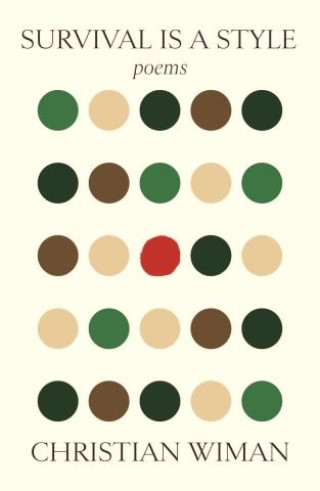 Survival Is a Style

Survival Is a Style, Christian Wiman’s first collection of new poems in six years, may be his best book yet.

His many readers will recognize the musical and formal variety, the voice that can be tender and funny, credibly mystical and savagely skeptical. But there are many new notes in this collection as well, including a moving elegy to the poet’s father, sharp observations and distillations of modern American life, and rangy poems that merge and juxtapose different modes of speech and thought. The cumulative effect is extraordinary.

Reading Survival Is a Style, one has the sense one is encountering work that will become a permanent part of American literature.

Christian Wiman: Christian Wiman is the author of several books, including two memoirs, My Bright Abyss: Meditation of a Modern Believer (FSG, 2013) and He Held Radical Light: The Art of Faith, the Faith of Art (FSG, 2018); Every Riven Thing (FSG, 2010), winner of the Ambassador Book Award in poetry; Once in the West (FSG, 2014), a National Book Critics Circle Award finalist in poetry; and Stolen Air: Selected Poems of Osip Mandelstam. He teaches religion and literature at the Yale Institute of Sacred Music and Yale Divinity School.