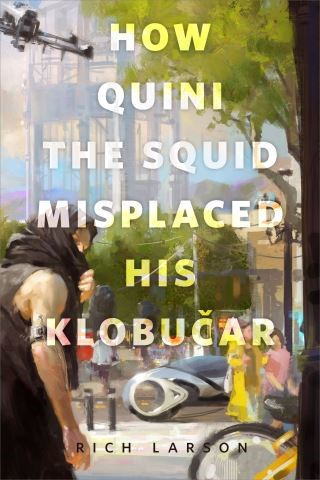 How Quini the Squid Misplaced His Klobucar

A dark, fast-moving novelette, Rich Larson's "How Quini the Squid Misplaced His Klobucar," is a Tor.com original short story about a high-tech heist in future Spain, planned by a professional thief who's interested in revenge more than money. The object in question is in the hands of a dangerous crime lord.

Rich Larson: Rich Larson was born in West Africa, has studied in Rhode Island and worked in Spain, and now writes from Grande Prairie, Alberta. His short work has been nominated for the Theodore Sturgeon, featured on io9, and appears in numerous Year’s Best anthologies as well as in magazines such as Asimov’s, Analog, Clarkesworld, F&SF, Interzone, Strange Horizons, Lightspeed and Apex. He was the most prolific author of short science fiction in 2015.