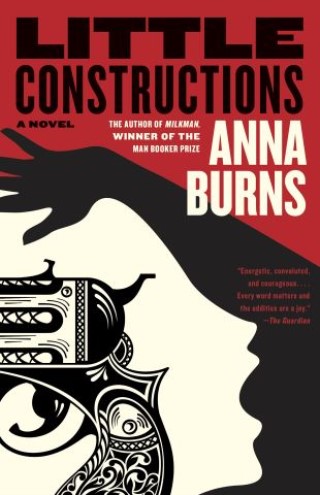 The darkly comic second novel from the author of the Man Booker Prize winner Milkman, now available in the United States

In the small town of Tiptoe Floorboard, the Doe clan, a close-knit family of criminals and victims, has the run of the place. Yet there are signs that patriarch John Doe’s reign may be coming to an end. When Jetty Doe breaks into a gun store and makes off with a Kalashnikov, the stage is set for a violent confrontation. But while Jetty is making her way across town in a taxi, an elusive, chatty narrator takes us on a wild journey, zooming in and out on various members of the Doe clan with long, digressive riffs that chase down the causes and repercussions of Jetty’s act.

Before Milkman took the world by storm after winning the Man Booker Prize, Anna Burns had already honed her distinctive voice. In her second novel, Little Constructions, she exhibits the same linguistic brio, coruscating wit, and scintillating insight into men, women, and the roots of violence. A wickedly funny novel that swoops and spirals as it examines the long shadow of abuse and violent crime, Little Constructions explores what transpires when unspeakable realities, long hidden from view, can no longer be denied.

Anna Burns: Anna Burns was born in Belfast, Northern Ireland. She is the author of three novels, including Milkman and No Bones, and a novella Mostly Hero. She lives in East Sussex, England.