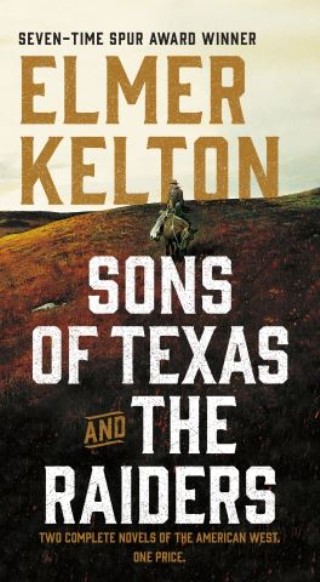 Sons of Texas and The Raiders: Sons of Texas offers two classic novels of the Old West for one low price, by renowned Western writer Elmer Kelton.

It’s 1816. Mordecai Lewis, a veteran of Andrew Jackson’s campaigns who’s thirsting for action, leads his two sons and a band of backwoodsmen to Spanish-held Texas on a campaign to hunt wild horses. Their plan is to sell the mustangs back in Tennessee, but tragedy strikes when a bloody skirmish leaves Mordecai dead, and brothers Michael and Andrew are forced to fend for themselves.

Sons of Texas and The Raiders: Sons of Texas follow the lives and adventures of the Lewis family through the era of the Alamo and Texas Independence under Sam Houston. From stealing horses to falling in love to being dogged by the ruthless Spanish officer who killed their father, Michael and Andrew endure enough trials and tribulations to fill the whole of Texas.

Elmer Kelton: ELMER KELTON (1926-2009) was the seven-time Spur Award-winning author of more than forty novels, including the Texas Rangers series, the Hewey Calloway series, and the Buckalew Family series. He was also the recipient of the Owen Wister Lifetime Achievement award. In addition to his novels, Kelton worked as an agricultural journalist for forty-two years, and served in the infantry in World War II. He passed away in 2009.