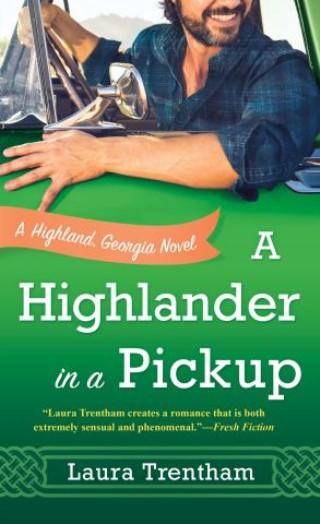 A Highlander in a Pickup

When a gorgeous new man—in a kilt—comes to town, life in Highland, Georgia will never be the same…

Iain Connors is the poster boy for the strong and silent type. Growing up a loner at Cairndow Castle in Scotland with only the cliffs and moors for company, it’s understood Iain will assume the mantle of Cairndow groundskeeper when his father is ready to relinquish it. But his stint in Her Majesty’s Armed Forces has opened up a whole new world—and now, rather than settle down, he accepts an invitation to travel to the States to take charge of the Highland Games. After all, he’s led men into battle, how hard can planning a party be?

Anna Maitland is ready to step up for her best friend Isabel Blackmoor, who can’t run the Games in their hometown this year. Surely Anna, a dance instructor with boundless energy, spirit, and charm, is up for the challenge? What she doesn’t anticipate is a man in a kilt who turns up claiming he’s the one in charge. What’s worse about this Iain? He’s so infuriatingly handsome that she can’t help but fantasize about him whispering sweet-nothings in her ear in his rumbly, sexy brogue. . .

“Trentham never misses the mark when she takes aim at the heart.”—Night Owl Reviews

An award-winning author, Laura Trentham was born and raised in a small town in Tennessee. Although, she loved English and reading in high school, she was convinced an English degree equated to starvation. She chose the next most logical major—Chemical Engineering—and worked in a hard hat and steel toed boots for several years.

She writes sexy, small town contemporaries and smoking hot Regency historicals. The first two books of her Falcon Football series were named Top Picks by RT Book Reviews magazine. Then He Kissed Me, a Cottonbloom novel, was named as one of Amazon’s best romances of 2016. When not lost in a cozy Southern town or Regency England, she's shuttling kids to soccer, helping with homework, and avoiding the Mt. Everest-sized pile of laundry that is almost as big as the to-be-read pile of books on her nightstand.