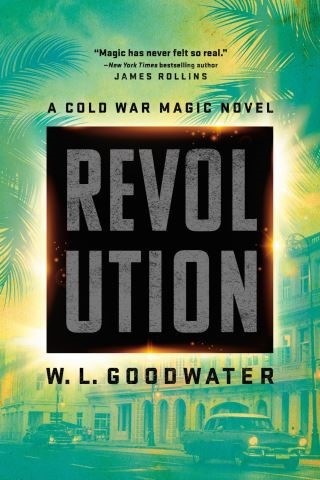 In the second novel in a thrilling Cold War fantasy series, American magician Karen O'Neil travels to Cuba to find a missing young girl intertwined with a new kind of magic that threatens to upend the balance of power of the whole world.

AFTER THE WALL FELL, NOTHING COULD BE THE SAME.

In Cold War Berlin, American magician Karen O'Neil defeated the ghosts of Germany's past and sealed the breach that threatened the whole world, but in doing so she learned a terrible truth: Magic cannot be trusted.

Despite her wariness of the new and growing powers she gained in Germany, Karen agrees to help an old friend and is drawn to Cuba, a world of opulence run by a corrupt government and ruthless, magic-obsessed mobsters.

In Havana, while the fires of revolution kindle, Karen searches for a missing girl whose fate is intertwined with impossible and deadly magic. And she knows she's being watched; both the Soviets and the CIA have designs on this island paradise, and their eyes are everywhere. But spies and rebels aren't the only dangers hiding in Havana's long shadows, and Karen will learn that the future can be just as dangerous as the past.

W.L. Goodwater: W. L. Goodwater is the author of the Cold War Magic series. He lives on the California coast with his wife, kids, and cats. When he's not writing books, he's usually reading them. Or thinking about them. Or just staring lovingly at them. His wife might like books even more than he does, and she finds his vain attempts to organize their bookshelves endearing; they are a perfect couple.