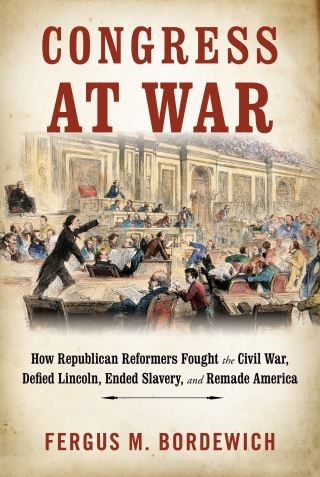 The story of how Congress helped win the Civil War--a new perspective that puts the House and Senate, rather than Lincoln, at the center of the conflict.

Building a riveting narrative around four influential members of Congress--Thaddeus Stevens, Pitt Fessenden, Ben Wade, and the pro-slavery Clement Vallandigham--Fergus Bordewich shows us how a newly empowered Republican party shaped one of the most dynamic and consequential periods in American history. From reinventing the nation's financial system to pushing President Lincoln to emancipate the slaves to the planning for Reconstruction, Congress undertook drastic measures to defeat the Confederacy, in the process laying the foundation for a strong central government that came fully into being in the twentieth century. Brimming with drama and outsized characters, Congress at War is also one of the most original books about the Civil War to appear in years and will change the way we understand the conflict.

Fergus M. Bordewich: FERGUS M. BORDEWICH is the author of seven previous nonfiction books, including The First Congress: How James Madison, George Washington, and a Group of Extraordinary Men Invented the Government; America's Great Debate: Henry Clay, Stephen A. Douglas, and the Compromise that Preserved the Union; Bound for Canaan: The Underground Railroad and the War for the Soul of America; and Washington: The Making of the American Capital. He lives in San Francisco with his wife, Jean Parvin Bordewich, who works in philanthropy and writes plays.