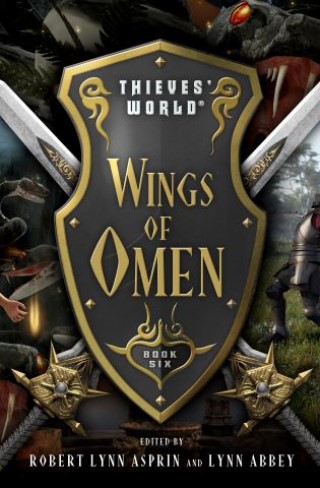 Sixth in the magical, action-packed shared-world series: “Thieves’ World® has grown into a real presence in the fantasy genre” (Fantasy-Faction).

Under the rule of a humanoid race, the city of Sanctuary finds itself divided. Rebels and assassins stalk the shadows, bringing chaos to the streets—which is nothing new to the lawless locals. But even they will have to put aside their differences to unite against their common enemy. An accomplishment easier said than done in a city where everyone is out for themselves . . .

“In the sixth book of the collection, the friction between the residents of Sanctuary and the invading Beysib heats up and makes for some exciting reading . . . Offutt’s character Shadowspawn gets some good coverage, and a few fresh new characters also get some play . . .” —Fantasy-Faction

“‘The Hand That Feeds You’ [by Diane Duane] is one of the best stories in the entire collection to date.” —brianbookreviews.blogspot.com

Joe Haldeman:
Joe Haldeman began his writing career while he was still in the army. Drafted in 1967, he fought in the Central Highlands of Vietnam as a combat engineer with the Fourth Division. He was awarded several medals, including a Purple Heart.

Haldeman sold his first story in 1969 and has since written over two dozen novels and five collections of short stories and poetry. He has won the Nebula and Hugo Awards for his novels, novellas, poems, and short stories, as well as the John W. Campbell Memorial Award, the Locus Award, the Rhysling Award, the World Fantasy Award, and the James Tiptree, Jr. Award. His works include The Forever War, Forever Peace, Camouflage, 1968, the Worlds saga, and the Marsbound series.

Haldeman recently retired after many years as an associate professor in the Department of Writing and Humanistic Studies at the Massachusetts Institute of Technology. He and his wife, Gay, live in Florida, where he also paints, plays the guitar, rides his bicycle, and studies the skies with his telescope.
John Brunner started his career as a productive writer of Ace Double Science Fiction novels, sometimes writing both sides of the same double. He produced a wide variety of entertaining and well-conceived science fiction adventures before testing his ambitions with more and more complex and stylistically sophisticated novels. Among his triumphs are Stand on Zanzibar (Hugo winner for Best Novel), The Jagged Orbit, The Sheep Look Up, The Shockwave Rider, and A Maze of Stars. Although he wrote relatively little fantasy, he was widely acclaimed for a series of short stories collected as The Compleat Traveller in Black. Brunner also wrote mysteries, thrillers, and several well-regarded historical novels.
Philip José Farmer (1918–2009) was born in North Terre Haute, Indiana, and grew up in Peoria, Illinois. A voracious reader, Farmer decided in the fourth grade that he wanted to be a writer. For a number of years he worked as a technical writer to pay the bills, but science fiction allowed him to apply his knowledge and passion for history, anthropology, and the other sciences to works of mind-boggling originality and scope.

His first published novella, “The Lovers” (1952), earned him the Hugo Award for best new author. He won a second Hugo and was nominated for the Nebula Award for the 1967 novella “Riders of the Purple Wage,” a prophetic literary satire about a futuristic, cradle-to-grave welfare state. His best-known works include the Riverworld books, the World of Tiers series, the Dayworld Trilogy, and literary pastiches of such fictional pulp characters as Tarzan and Sherlock Holmes. He was one of the first writers to take these characters and their origin stories and mold them into wholly new works. His short fiction is also highly regarded.

In 2001, Farmer won the World Fantasy Award for Life Achievement and was named Grand Master by the Science Fiction & Fantasy Writers of America.