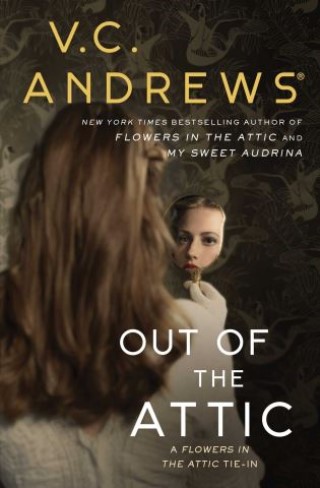 Out of the Attic

“I will probably be clutching Flowers in the Attic in my gnarled hands on my deathbed.” —GILLIAN FLYNN, #1 New York Times bestselling author of Sharp Objects

The twisted, beloved Dollanganger legend began two generations before Corrine Foxworth locked away her children in Flowers in the Attic. The second book in a new prequel story arc, Out of the Attic explores the Dollanganger family saga by traveling back decades to when the clan’s wicked destiny first took root.

Married to the handsome, wealthy Garland Foxworth following a wildfire romance, and an unexpected pregnancy, young Corrine Dixon finds her life very different from how she imagined it. Often alone in the mansion of Foxworth Hall, she can practically feel the ancestors’ judgment of her as insufficient—as not a Foxworth. Stern portraits glare at her from the walls, and the servants treat her strangely. Nothing in the vast place is truly hers.

Even her son, Malcolm Foxworth, born in the luxe Swan Room and instantly whisked away to a wet nurse, feels alien to her. With a husband alternately absent and possessively close, Corrine doesn’t yet realize that she’s barely scratched the surface of what lies beneath Foxworth Hall’s dark facade and the family that guards its legacies.

With the fortieth anniversary celebration of Flowers in the Attic, and ten new Lifetime movies in the past five years, there has never been a better time to experience the forbidden world of V.C. Andrews.

V.C. Andrews: One of the most popular authors of all time, V.C. Andrews has been a bestselling phenomenon since the publication of Flowers in the Attic, first in the renowned Dollanganger family series, which includes Petals on the Wind, If There Be Thorns, Seeds of Yesterday, and Garden of Shadows. The family saga continues with Christopher’s Diary: Secrets of Foxworth, Christopher’s Diary: Echoes of Dollanganger, and Secret Brother, as well as Beneath the Attic, Out of the Attic, and Shadows of Foxworth as part of the fortieth anniversary celebration. There are more than eighty V.C. Andrews novels, which have sold over 107 million copies worldwide and have been translated into twenty-five foreign languages. Join the conversation about the world of V.C. Andrews at Facebook.com/OfficialVCAndrews.