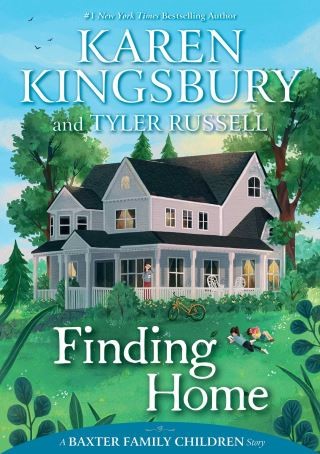 Much-loved storyteller Karen Kingsbury’s Baxter Family books have captured the hearts of tens of millions of readers who have come to think of the Baxter family as their own. Now Karen Kingsbury and her son Tyler Russell inspire and entertain young readers by going back in time to tell the childhood stories of the beloved Baxter children—Brooke, Kari, Ashley, Erin, and Luke.

Summer is over and Dad begins his important position at an Indiana hospital. Like it or not, Bloomington is the Baxter Family’s new home. As school starts, everyone finds reasons to be excited about the move. Everyone that is except Ashley. Ashley desperately misses the home and friends she left behind. As she realizes her siblings have their struggles, too, she can’t help but wonder if unlikely friends can be the best friends of all? And could time and love from her family be enough to make a house feel like home?

Karen Kingsbury: Karen Kingsbury, #1 New York Times bestselling novelist, is America’s favorite inspirational storyteller, with more than twenty-five million copies of her award-winning books in print. Her last dozen titles have topped bestseller lists and many of her novels are under development as major motion pictures. Her Baxter Family books are being developed into a TV series slated to debut soon. Karen is also an adjunct professor of writing at Liberty University. She and her husband, Donald, live in Tennessee near their children and grandchildren.Tyler Russell has been telling stories his whole life. In elementary school, he won a national award for a children’s book he wrote, and he has been writing ever since. In 2015 he graduated college with a BFA from Lipscomb University. Soon after, he sold his first screenplay, Karen Kingsbury’s Maggie’s Christmas Miracle, which premiered in December of 2017 on Hallmark. Along with screenplays and novels, Tyler is a songwriter, singer, actor, and creative who lives in Nashville, Tennessee, where he enjoys serving his church, adventuring around the city, and spending time with his family.