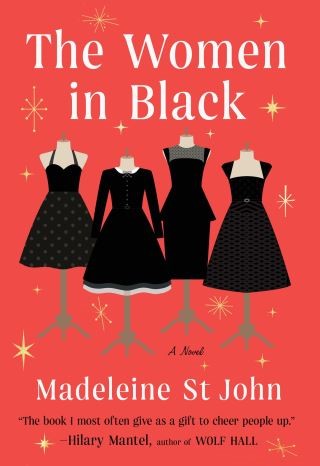 The Women in Black

“The book I most often give as a gift to cheer people up.” —Hilary Mantel

The women in black, so named for the black frocks they wear while working at Goode’s department store, are busy selling ladies’ dresses during the holiday rush. But they somehow find time to pursue other goals…

Patty, in her mid-thirties, has been working at Goode’s for years. Her husband, Frank, eats a steak for dinner every night, watches a few minutes of TV, and then turns in. Patty yearns for a baby, but Frank is always too tired for that kind of thing.

Sweet, unlucky Fay wants to settle down with a nice man, but somehow nice men don’t see her as marriage material.

Glamorous Magda runs the high-end gowns department. A Slovenian émigré, Magda is cultured and continental and hopes to open her own boutique one day.

Lisa, a clever and shy teenager, takes a job at Goode’s during her school break. Lisa wants to go to university and dreams of becoming a poet, but her father objects to both notions.

By the time the last marked-down dress is sold, all of their lives will be forever changed.

A pitch-perfect comedy of manners set during a pivotal era, and perfect for fans of The Marvelous Mrs. Maisel, The Women in Black conjures the energy of a city on the cusp of change and is a testament to the timeless importance of female friendship.

Madeleine St John: Madeleine St. John was born in Sydney in 1941. In 1965 she moved to the United States and attended Stanford, and later moved to England to attend Cambridge University. In 1993, she published her debut novel in Australia, The Women in Black. She is author of three other novels including The Essence of the Thing, shortlisted for the Man Booker Prize. St. John was the first Australian woman to receive this honor. Madeleine St. John died in 2006.