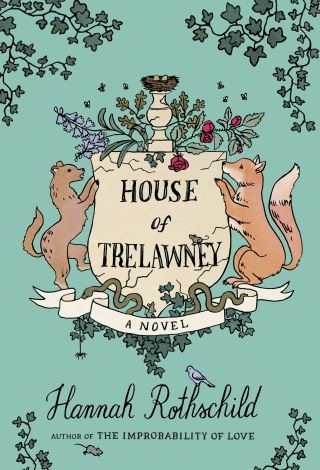 From the author of The Improbability of Love: a dazzling novel both satirical and moving, about an eccentric, dysfunctional family of English aristocrats, and their crumbling stately home that reminds us how the lives and hopes of women can still be shaped by the ties of family and love.

For more than seven hundred years, the vast, rambling Trelawney Castle in Cornwall--turrets, follies, a room for every day of the year, four miles of corridors and 500,000 acres--was the magnificent and grand "three dimensional calling card" of the earls of Trelawney. By 2008, it is in a complete state of ruin due to the dulled ambition and the financial ineptitude of the twenty-four earls, two world wars, the Wall Street crash, and inheritance taxes. Still: the heir to all of it, Kitto, his wife, Jane, their three children, their dog, Kitto's ancient parents, and his aunt Tuffy Scott, an entomologist who studies fleas, all manage to live there and keep it going. Four women dominate the story: Jane; Kitto's sister, Blaze, who left Trelawney and made a killing in finance in London, the wildly beautiful, seductive, and long-ago banished Anastasia and her daughter, Ayesha. When Anastasia sends a letter announcing that her nineteen-year-old daughter, Ayesha, will be coming to stay, the long-estranged Blaze and Jane must band together to take charge of their new visitor--and save the house of Trelawney. But both Blaze and Jane are about to discover that the house itself is really only a very small part of what keeps the family together.

Hannah Rothschild: HANNAH ROTHSCHILD is the author of The Improbability of Love and The Baroness: The Search for Nica, the Rebellious Rothschild. She is also a company director and a filmmaker who has made documentary features and series for the BBC and HBO. She writes for The Times, The New York Times, Vogue, Bazaar and Vanity Fair. She is a vice president of the Hay Literary Festival, a former trustee of the Tate Gallery, and in 2015 became the first woman to chair the trustees of the National Gallery. In 2018, she was made a CBE for services to the arts and to philanthropy. She lives in London with her three daughters.