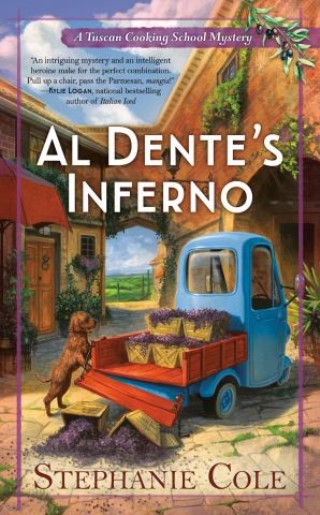 An American chef will have to serve up more than good eats if she wants to establish a successful farm-to-table cooking school in Tuscany, in this charming first installment in a new cozy mystery series set in Italy.

When Nell Valenti is offered a chance to move to Tuscany to help transform an aging villa into a farm-to-table cooking school, she eagerly accepts. After all, both her job and her love life in America have been feeling stale. Plus, she'll get the chance to work under the acclaimed Italian Chef Claudio Orlandini.

But Nell gets more than she bargained for when she arrives. With only a day to go until the launch dinner for the cooking school, the villa is in shambles, and Chef O is blissfully oblivious of the work that needs to be done before a group of local dignitaries arrive, along with a filmmaker sent to showcase and advertise the new school. The situation only worsens when Nell discovers that the filmmaker is an ex-boyfriend, and he’s found murdered later that night. Even worse, Chef O has disappeared, and accusations of murder could shut the school down for good.

As tensions reach a boiling point at the villa, Nell must throw her chef's hat into the ring, and investigate the murder herself. Because if she fails to solve the case, her career, or even her life, could be next on the chopping block.

Stephanie Cole: Stephanie Cole is an active member of the mystery writing community. Writing as Shelley Costa, she was nominated for both an Edgar and an Agatha award, and she cofounded the Northeast Ohio chapter of Sisters in Crime. She teaches creative writing workshops and lectures on American literature in the greater Cleveland area. For fun she takes violin lessons, studies Art History—and eyes them both for murder plots.