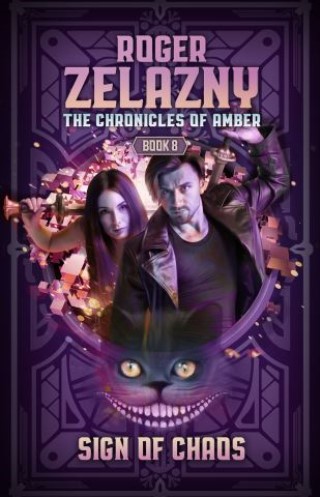 The Chronicles of Amber Book 8

Merlin finds himself in a marvelous bar drinking with Luke, the Cheshire Cat, and the Mad Hatter. He can’t help but feel that perhaps this isn’t . . . Normal. When the Jabberwock appears Merlin’s head clears just enough to realize that he’s caught in Luke’s LSD-inspired hallucination. When a Fire Angel, one of the most powerful, magical killing beasts in existence, arrives to kill him he realizes that he has to do something quick or both he and Luke are finished. The Jabberwock becomes an unlikely ally in his battle with the Fire Angel. And this is only the beginning of Merlin’s magical adventures in Sign of Chaos.

“A storyteller without peer. He created worlds as colorful and exotic and memorable as any our genre has ever seen.” —George R.R. Martin

“. . . his performance was never anything other than dazzling.” —Robert Silverberg

“Roger Zelazny’s work excited me. It was intoxicating and delightful and unique. And it was smart.” —Neil Gaiman

Roger Zelazny was a science fiction and fantasy writer, a six-time Hugo Award winner, and a three-time Nebula Award Winner. He published more than forty novels in his lifetime. His first novel This Immortal, serialized in The Magazine of Fantasy and Science Fiction under the title ...And Call Me Conrad, won the Hugo Award for best novel. Lord of Light, his third novel, also won the Hugo award and was nominated for the Nebula award. He died at age 58 from colon cancer. Zelazny was posthumously inducted into the Science Fiction Hall of Fame in 2010.