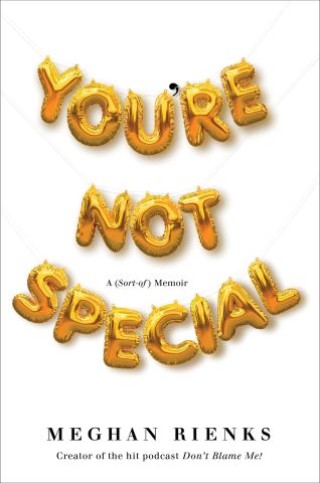 In her first-ever (sort of) memoir, the beloved actor and YouTube sensation gets personal about everything from mental health to drunken debaucheries.

As an only child raised in a town of less than 8,000 people and without a Starbucks in sight, Meghan Rienks has always been pretty good at entertaining herself. Then one day—cue the dramatic voiceover—her life changed forever.

On June 12th, 2010, Meghan was diagnosed with mononucleosis. Mono is basically just a really bad case of the flu, right? Wrong. To a party crazed sixteen-year-old, mono is social suicide. More than anything, it’s just plain boring. So, Meghan opened up her 2009 MacBook, used the webcam for something other than a bad Andy Warhol–style photobooth session, and recorded her first YouTube video. Since then, Meghan has shared the ups and downs of her life with the internet, documenting her teenage years for the whole world to see.

Now that she’s (mostly) through her awkward stage, Meghan’s here to tell you that it gets better. You’re not alone in the thoughts you think. Sometimes a bad hair day feels worse than a punch in the gut and asking a boy out seems about as difficult as achieving that perfect dewy glow. But despite what you’ve been told, your problems are not unique, your struggles have taken form in everybody else’s life too, and somebody else has felt the way you feel right at this very moment.

You’re not special. But you’re also not alone on the bumpy road to adulthood.

Meghan Rienks: Meghan Rienks is an actress and the creator of her own wildly popular comedy and lifestyle YouTube channel. Meghan flexes her acting muscles (and sometimes her real muscles) in a number of series, including Freakish, 12 Deadly Days of Christmas, Mr. Student Body President, and in her first feature film, The Honor List. As a social media tastemaker, Meghan has been named one of Teen Vogue’s Top 6 Instagram A-Listers and Allure’s Instagram Influencer of the Year. She lives in Los Angeles.